Simon Black – They blew it… 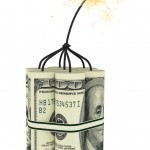 – Comment by Steven Ricchiuto of Mizuho Securities in response to the Federal Reserve’s surprise decision to refrain from “tapering” its $ 85 billion monthly bond purchase program.

Human beings are suckers for a story.

The story peddled by mainstream economic commentators goes that the US Federal Reserve and its international cousins have acted boldly to prevent a second Great Depression by stepping in to support the banks, (and not coincidentally the government bond markets) by printing trillions of dollars through the mechanism of quantitative easing.

It’s a story alright. But more akin to a fairy tale story.

We favor an alternative narrative, namely that politicians have abdicated all real responsibility in addressing the financial and economic crisis, and the heavy lifting has been left to central bankers who have run out of conventional policy options and are now stroking the fire for the next financial crisis by attempting to rig prices throughout the financial system.

Moreover, their actions have had a grave impact on volatility across credit markets, government bond markets, equities, commodities..

But in reference to Steven Ricchiuto of Mizuho Securities (see quote above), it’s quite easy to be brave when you’re spending other people’s money. Or money conjured from thin air.

In defending an insolvent banking system, central banks have now created an absurd situation. This writer, for example, has a meaningful cash deposit with a UK commercial bank that is currently earning 0.0% interest (let’s say minus 3% in real terms).

To put it another way, we have 100% counterparty and credit risk with a minus 3% annual return.

But the Fed has muddied the pond further by attempting a policy of “forward guidance” that is little more than a sick joke, given the recent sell-off in government bond markets and the resultant rise in government bond yields, on fears of “tapering”.

It’s clear the Fed has lost control of the bond market. And as Swiss investor Marc Faber puts it,
“The question is when will it lose control of the stock market.”

Meanwhile, the impact of the Fed’s policies on the general economy has been… questionable, at best. But their impact on financial markets has been demonstrably beneficial to investment banks and their largest clients.

As Stanley Druckenmiller points out, the Fed didn’t act bravely, they bottled it. They had the opportunity to start, ever so gently, to reverse a policy of monstrous intervention in the capital markets, and they blew it.

“The endgame is a total collapse, but from a higher diving board. The Fed will continue to print and if the stock market goes down 10% they will print even more. And they don’t know anything else to do. And quite frankly, they have boxed themselves into a corner where they are now kind of desperate.”

The Fed may be desperate, but we’re not. We have our client assets carefully corralled into four separate asset classes.

High quality debt (not US Treasuries or UK Gilts) offers income and a degree of capital protection given that the central banks have demolished deposit rates.

Defensive equities give us some skin in the game given central bank bubble-blowing in the stock market – but this game ends in tears.

Uncorrelated, systematic trend-followers give us a market neutral way of prospectively benefiting from any disorderly market panic.

And real assets (namely precious metals) give us some major skin in the game in the event of an inflationary disaster.

Since pretty much all of these assets can be marked to market on a daily basis, they are not free of volatility, but we are more concerned with avoiding the risk of permanent loss of capital, Cypriot bank-style.

We have, in other words, Fed-proofed our portfolios to the best of our ability. Because, now that the Fed has blinked in the face of market resistance, it seems inevitable to us, as it does to people like Marc Faber, that at some point, possibly in the near future, traditional assets are at risk of loudly going bang.

How close are you going to be to the explosion?