Simon Black – The amazing disappearance of GOLD from the American psyche

In George Orwell’s seminal work 1984, there’s a really great scene early in the book between Winston (the main character) and Syme, a low-level functionary at the Ministry of Truth.

Syme is working on the 11th Edition of the Newspeak Dictionary, and he explains to Winston how the Ministry of Truth is actually removing words from the English vocabulary.

In Newspeak, words like -freedom- have been struck from the dictionary altogether, to the point that the mere concept of liberty would be incommunicable in the future.

I thought about this scene recently as I was testing out Google’s new Ngram Viewer tool.

If you haven’t seen it yet, Google has digitized over a million books that were printed as far back as 1500, and they’ve made the contents searchable within their own database.

Out of curiosity, I searched for the term “gold” in English language books starting in 1776.

As one would expect back in the 18th and 19th centuries when gold was actually considered money, the instances of the word ‘gold’ favored prevalently in English language books at the time.

The trend continued into the early part of the 20th century.

But then something interesting happened in the mid-1930s. The use of the word ‘gold’ in English language books reached its peak… and began a steep, multi-decade decline. 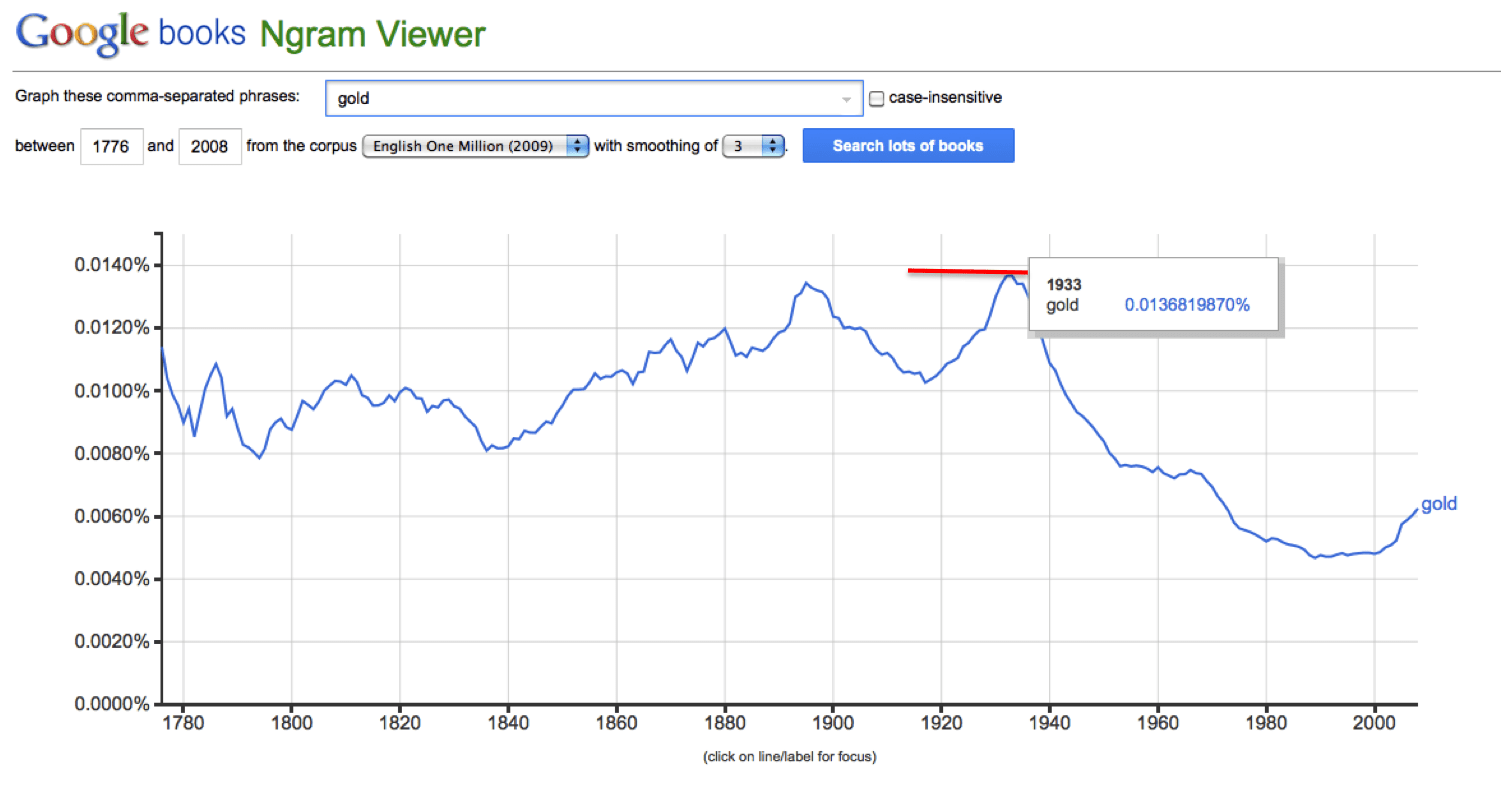 Further investigation shows that the peak actually occurred in 1933. And as any student of gold in modern history knows, 1933 was the same year that the President of the United States (FDR) criminalized the private ownership of gold.

It remained this way for four decades. And by the time Gerald Ford repealed the prohibition on gold ownership, the concept of gold being money had been permanently struck from the American psyche, just as the Orwellian Newspeak dictionary had done.

By the mid-1970s (and through today), people have become readily accepting of the idea that money was nothing more than pieces of paper conjured at will by central bankers.

The good news is that, according to Google’s data, there seems to be slight uptick in the number of instances of the word ‘gold’ in English language books over the last 10-years or so.

No doubt, this probably has a lot to do with gold’s seemingly interminable rise relative to paper currency.

One can hope that the trend will hold… that more people will wake up to the reality that the central-bank controlled fiat currency system is a total fraud.

The amazing disappearance of GOLD from the American psyche