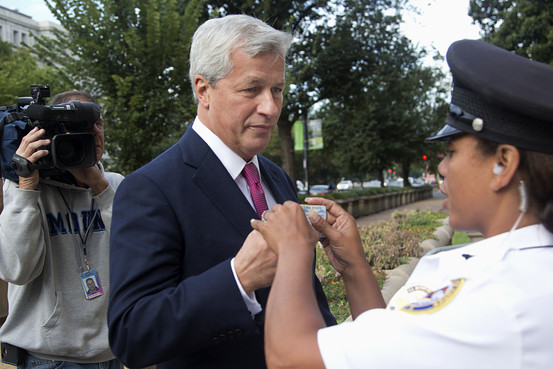 J.P. Morgan Chase CEO James Dimon presents his identification to a security officer as he arrives at the Justice Department in Washington on Thursday amid talks over a possible $ 11 billion settlement between regulators and the bank.

Mr. Dimon arrived at the Justice Department building around 9:20 a.m. to meet with Attorney General Eric Holder, according to a person familiar with the meeting. Mr. Dimon and Mr. Holder met face-to-face to discuss terms of a potential deal, according this person. Like all visitors to the building, Mr. Dimon showed identification to the guards—in his case a New York State driver’s license—and proceeded inside. He left the building less than two hours later.

The Justice Department has at least seven ongoing probes of the bank, and the bank’s leadership is trying to resolve them in a rapid fashion.

J.P. Morgan made a settlement offer of $ 3 billion on Monday night to settle investigations of alleged past abuses in residential mortgage-backed securities—a figure that was rejected by Mr. Holder, according to people familiar with the discussions.

The bank, according to these people, has been trying to resolve as many cases as possible. Last week, it agreed to pay $ 920 million to settle regulatory charges related to its “London whale” trades and admitted wrongdoing.

A key sticking point in the Justice talks has been the possibility of criminal charges—and whether the bank is willing to admit wrongdoing to avoid such charges, the people said. If a deal with Justice falls through, the U.S. could be left to pursue a previously threatened civil lawsuit against J.P. Morgan.

Mr. Holder and Mr. Dimon are expected to discuss the contours of the settlement at Thursday’s meeting. The bank’s share price early Thursday was rising more strongly than the general market.

One scenario under discussion would include a $ 7 billion cash penalty plus $ 4 billion in relief that J.P. Morgan would provide to consumers, a person familiar with the discussions said.

As of Wednesday, the two sides still were billions of dollars apart, depending on which set of investigations might ultimately be resolved in any potential deal, another person familiar with the matter said. The price tag could change substantially again if one or more agencies bow out of the discussions.

J.P. Morgan wants any potential pact to make clear that the probes are finished and that the bank won’t face any further liability on mortgage-backed securities, according to one person familiar with the talks.