Gold, Silver and the Debt Ceiling

To paraphrase William Shakespeare, “the debt ceiling drama is a tale told by idiots, full of sound and political fury, signifying nothing.” We now have a reprieve for three months – the 11th hour deal, complete with payoffs and the usual corruption, will keep the world safe for more ineptitude, deficit spending, administrative hypocrisy and the guarantee of a sequel. All is well! Celebration! Champagne! Cut to a prime-time commercial promoting big government and Obamacare…

And back in the real world where people work and support their families, life goes on, few noticed the lack of government “services,” and in three months we will be blessed with another episode of our “Congressional Reality Show.”

Examine the following graph. It is a graph of smoothed* annual gold and silver prices and the official U.S. national debt since 1971 when the dollar lost all gold backing and was “temporarily” allowed to float against all other unbacked debt based currencies. All values start at 1.0 in 1971. 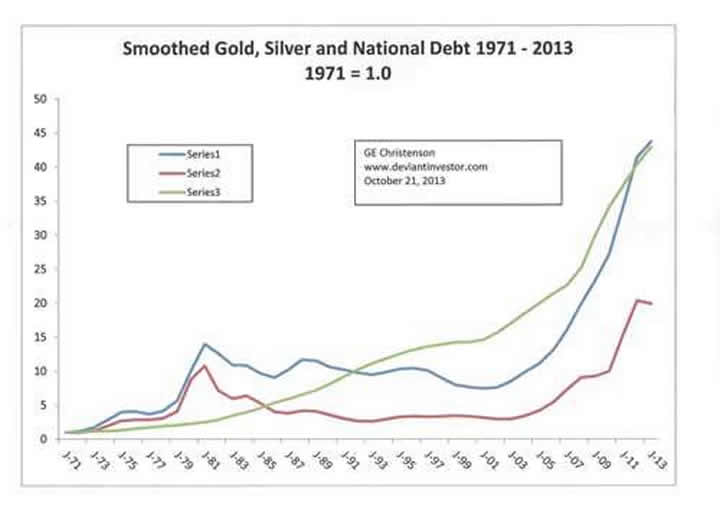 The legend does not show which line represents gold, silver, or the national debt. Why? Because it hardly matters! Government spends too much money to perform a few essential services and to buy votes, wars, and welfare, and thereby increases its debt almost every year, while gold and silver prices, on average, match the increases in accumulated national debt.

Our 435 representatives, 100 senators, and the administration listened to their corporate backers and chose to increase the debt ceiling, continue spending as usual, not “rock the boat,” and carry on with the serious business of politics and payoffs for another three months. It is safe to say that, on average, gold and silver will continue rising, along with the national debt, as they all have for the past 42 years. Further, like the national debt, both gold and silver (and probably most consumer prices) will increase substantially from here, until some traumatic “reset” occurs. What sort of reset?

My guess: Gold and silver prices will rise gradually for a while, and then quite rapidly after one of the above “financial icebergs” smashes into our “Titanic” world monetary system. Further, we will have difficulty locating physical gold available for sale after such an event occurs, even at much higher prices. Now would be a good time to purchase physical gold and silver for storage in a secure storage facility. Paper gold will not be safe…

Congress has acted. The President has spoken. The Federal Reserve will continue “printing” dollars to increase banker profitability, fund the government, and fight the forces of deflation. This is business as usual – as it has been for the past 42 years. 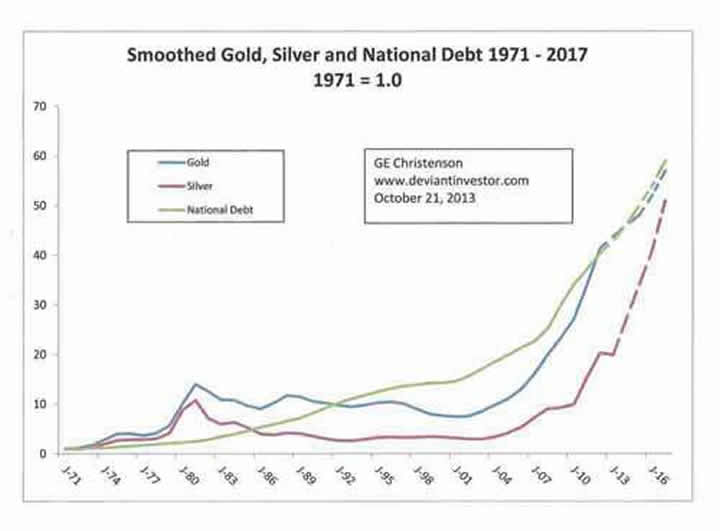 The debt ceiling drama and “Congressional Reality Show” will return to prime time in January and February, right after “Dancing with the Senators” and just before “House Wives of Salt Lake City.” Expect sound and fury signifying nothing.

Further commentary on the case for gold and silver:

The Reality of Gold and the Nightmare of Paper

Silver: The Noise is Deafening

GE Christenson aka Deviant Investor If you would like to be updated on new blog posts, please subscribe to my RSS Feed or e-mail

© 2013 Copyright Deviant Investor – All Rights Reserved Disclaimer: The above is a matter of opinion provided for general information purposes only and is not intended as investment advice. Information and analysis above are derived from sources and utilising methods believed to be reliable, but we cannot accept responsibility for any losses you may incur as a result of this analysis. Individuals should consult with their personal financial advisors.

Gold, Silver and the Debt Ceiling

https://www.youtube.com/watch?v=0L7SOPDOvvI In his latest video, Peter Schiff shares his thoughts on the bitcoin mania that is ...read more