Posted By Richer Daddy on November, 2010 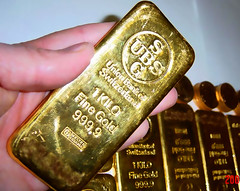 The latest Wall Street Journal is filled with stories about financial planners advising clients to either sell their gold or not buy anymore.

Naturally, you’re probably asking, “Should I buy or sell gold?”

My answer is that it depends.

In 1996, with gold and silver so low in price, a group of investors and me purchased a silver mine in South America and a gold mine in China. We nearly went broke bringing both mines to market in Canada. The silver mine was sold to another silver company and the Chinese gold mind went public through an IPO on the Canadian Exchange.

I regret selling that silver mine. I should’ve held on to it but the cash was tight and the offer too good to refuse.

In 2000, Rich Dad Poor Dad was still a self-published, obscure book. We had no income from the book or our games. Oprah hadn’t called yet to get me on her program. Our primary investments at the time were larger apartment houses and one commercial property. Cash was tight in 2000, but with gold and silver at such low prices, we cut corners on food and luxuries and bought as many gold and silver coins we could afford.

In 2001, after Rich Dad Poor Dad took off, Ron Insana interviewed me on the financial TV channel, CNBC. He asked me what I was investing in and I told him gold. He thought gold was a strange investment but listened to my arguments politely.

Today, gold is on everyone’s mind. Many say gold is in a bubble. Some say it’s time to sell, not to buy. Personally, I’m not buying much more gold and silver because I have enough. But you might want to know why I’m not selling.

Why I’m not selling
The primary reason I’m not selling my gold and silver is that the US government is in big trouble and the problems are getting bigger, not better. In the October 25th edition of The Wall Street Journal, a number of articles validate my concerns.

I knew such a neutral position between bonds and TIPS couldn’t last long. Today, TIPS are so hot that they’re selling for a negative yield. In other words, the fear of inflation is so high that TIPS investors will do anything to get their money into something that won’t lose value. TIPS investors are paying money in order to not loose as much money as they could otherwise, if that makes any sense.

The article on TIPS in The Wall Street Journal was only the tip of the iceberg. On the same page were articles with headlines such as:

California Oils The Bond Press: This means California is going to print more money. That’s bad news for savers of dollars but good news for investors in gold and silver.

Dollar is poised to slide further: This means the currency wars are on. A lower dollar means a loss of purchasing power and inflation for people who use dollars. That’s bad news for savers of dollars and good news for gold and silver investors.

JP Morgan to Launch Copper ETF: Copper is an essential metal for construction. Copper is now the darling of the investment community. Good news for investors in copper and those betting on a recovery.

Advisors Try To Tame Appetite for Gold: Claiming gold is in a bubble, financial planners are advising investors against gold—typical advice from financial planners. Why didn’t they advise their clients to buy gold from 1996 to 2006? The reason is because they make more money selling riskier investments.

So, from just one page of The Wall Street Journal, there are four articles indicating inflation, when the article on TIPS is included, and only one article about financial planners advising against gold.

I’m betting gold and not the advisors. What you do is up to you.

The primary reason I hold on to gold and silver is because the US has massive problems still ahead. We have a massive budget deficit, debt that won’t stop, and a dysfunctional political system. On top of that, there are approximately 75 million baby-boomers about to start collecting Social Security and Medicare. Medicare is slated to go broke in 2019, and to make matters worse, President Obama passed Obama care, adding to the costs. This is nuts.

I’m not blaming President Obama. He’s accurate when he says that he inherited the problem. For those of you who’ve read Conspiracy of the Rich: The 8 New Rules of Money, you know that today’s problems started a long time ago and have only grown worse.

I doubt the US can solve our financial problems. We’ll never be able to produce enough to pay our bills. Our budget problems are now too big. Since the US cannot produce more than we spend, the way the US will attempt to solve the government’s financial problems is by printing more money.

And as long as the US is going to print money, I’ll stick with gold and silver. If the government stops printing money, I may start selling.

But if the US stops printing money, you’ll definitely want to buy a gun and enough ammunition to last a while. It may take sometime for the rioting and looting to subside.