Is your head spinning these days trying follow what is going on with the economy?

Every day it seems as if these words — which nobody you knew was using just a few months ago — are being thrown around.

The stock market is down. Government officials are scrambling to find ways to help the economy. And a lot of people are talking about a recession.

So what does it all mean? And how did this all begin, especially when just a few years ago the economy was booming thanks to the red-hot real estate market?

Well, that’s where the problem starts.

A combination of low interest rates and aggressive new lending practices in the late 1990s and early 2000s led to a buying frenzy.

Many banks were enticing first-time home buyers into the market with pitches of “historically low interest rates” and “no down payment required.”

In June 2003, the Federal Reserve had lowered its key Fed Funds interest rate to just 1 percent. Mortgage rates were of course higher, but were still considered a relative bargain.

Banks had also changed the way they made loans, opening up the American dream of homeownership to a whole new group of people who had always considered themselves renters. 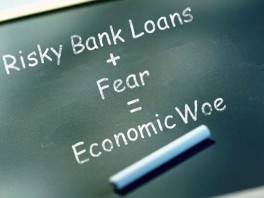 With rising home values, almost everyone believed they could get rich just by buying a home. And pretty much everyone — even those with terrible credit histories — could get a home loan.

Many got adjustable-rate mortgages with low, introductory teaser rates that made their mortgage payments affordable. Those rates would eventually reset to higher ones, but many owners planned to sell first or refinance.

Even high-risk borrowers — if they made their mortgage payments on time and built up a good credit history — could refinance into a more traditional fixed-rate mortgage before their interest rates reset.

And since the home would undoubtedly be worth more than it was just a few years ago, the banks were willing to lend out more money because the collateral for a loan — the house — would theoretically be worth even more in a year or two.

To facilitate some of these new loans to riskier borrowers, lenders and those on Wall Street came up with new ways to package them up and sell them off to big pension funds, private equity firms, mutual funds, foreign investors and any other investors looking to profit from the housing boom.

Gone were the good old days when everything was simpler, where a local bank manager who knew a borrower for years would issue a mortgage.

The idea behind these investments, known as collateralized debt obligations — or CDOs — is that by grouping hundreds or thousands of mortgages together the risk of loss because of nonpayment is significantly reduced.

In one group of mortgages — say 1,000 homes — 40 or so might not be paying on time. But the profits you make off the other 960 mortgages will offset any losses you suffer from those 40 bad loans.

So what was once considered an undesirable mortgage to somebody with poor credit — a so-called subprime borrower — was now deemed a safe investment. Wall Street rating agencies gave the investments their blessings, and investors started buying them thinking there was little risk and high reward to buying these mortgages.

But then things changed.

As adjustable mortgages started to reset to higher rates, more people started to default on their loans, making investors uncomfortable.

Two things started to happen. First, banks and other lenders started to tighten their lending standards, realizing that they had been too liberal in who they lent money to.

Second, the value of these investments started to fall as more people defaulted. Many banks and investment firms had these investments on their books as assets. They had taken out various loans using these assets as collateral. But as these bundles of loans declined in value, the banks decided to make fewer loans.

So if a manufacturing company needed to borrow $10 million to add a second assembly line to grow its business, it now found fewer banks willing to lend it the cash. The same held true for large corporations that wanted to borrow money to buy out other companies.

Starting in September 2007, the Federal Reserve has tried to make it more affordable for individuals, banks and companies to borrow by lowering interest rates, which also makes it easier for banks themselves to borrow money directly from the Fed.

But there have been many bumps along the way.

While all of this has been occurring on Wall Street, home prices across the country have been falling.

It started with the rise in foreclosures, which created a surplus of homes on the market.

Further compounding the situation, lenders have now tightened the standards of who can borrow money to buy a home. So there are more homes now available for purchase and fewer people who can buy them. That causes prices to fall.

Real estate agents suffered. So did mortgage lenders, real estate appraisers and everybody else involved with the sale of a house.

Developers stopped building new homes because the demand was no longer there and they couldn’t get the same price for their products.

But it didn’t end there. The home improvement industry also suffered. With homes worth less, homeowners no longer have as large home equity lines and can’t afford to put in that new deck or buy that new refrigerator.

Additionally, since fewer people were buying homes, there was less renovating. So that meant decreased sales of paint, new sofas or whatever else people typically buy when moving into a new house.

So that’s the housing market and the world of Wall Street. But why are we now talking about a full-scale recession hitting all parts of the economy?

It all comes down to consumer confidence.

Americans have much of their savings and their sense of wealth tied up in their homes.

When home prices start to fall, that feeling of wealth disappears. Whether they are really worse off today than than they were a month ago doesn’t matter. What matters is that they feel poorer, which in turn leads them to spend less.

While many economists believe that we are already in a recession, the official determination of when a recession begins and ends comes from a committee of the National Bureau of Economic Research called the Business Cycle Dating Committee.

The group’s definition of a recession is: “a significant decline in economic activity spread across the economy, lasting more than a few months, normally visible in real GDP, real income, employment, industrial production and wholesale-retail sales.”

The widely held maxim of “two quarters of negative growth” is not a requirement for a recession, but that is often the easiest attribute to see when a recession occurs.

Falling wages are not always part of a recession, and inflation-adjusted income has not fallen substantially during five of the past nine recessions.

This was true during the most recent recession in 2001, when fast growth in productivity and declines in the price of imports, especially oil, raised purchasing power while employment was falling.

It has been almost seven years since the last U.S. recession, which was from March to November 2001. Before then, there was a recession from July 1990 to March 1991, and a previous one beginning in July 1981 and ending in November 1982.

Raising Kids in a Consumerist World